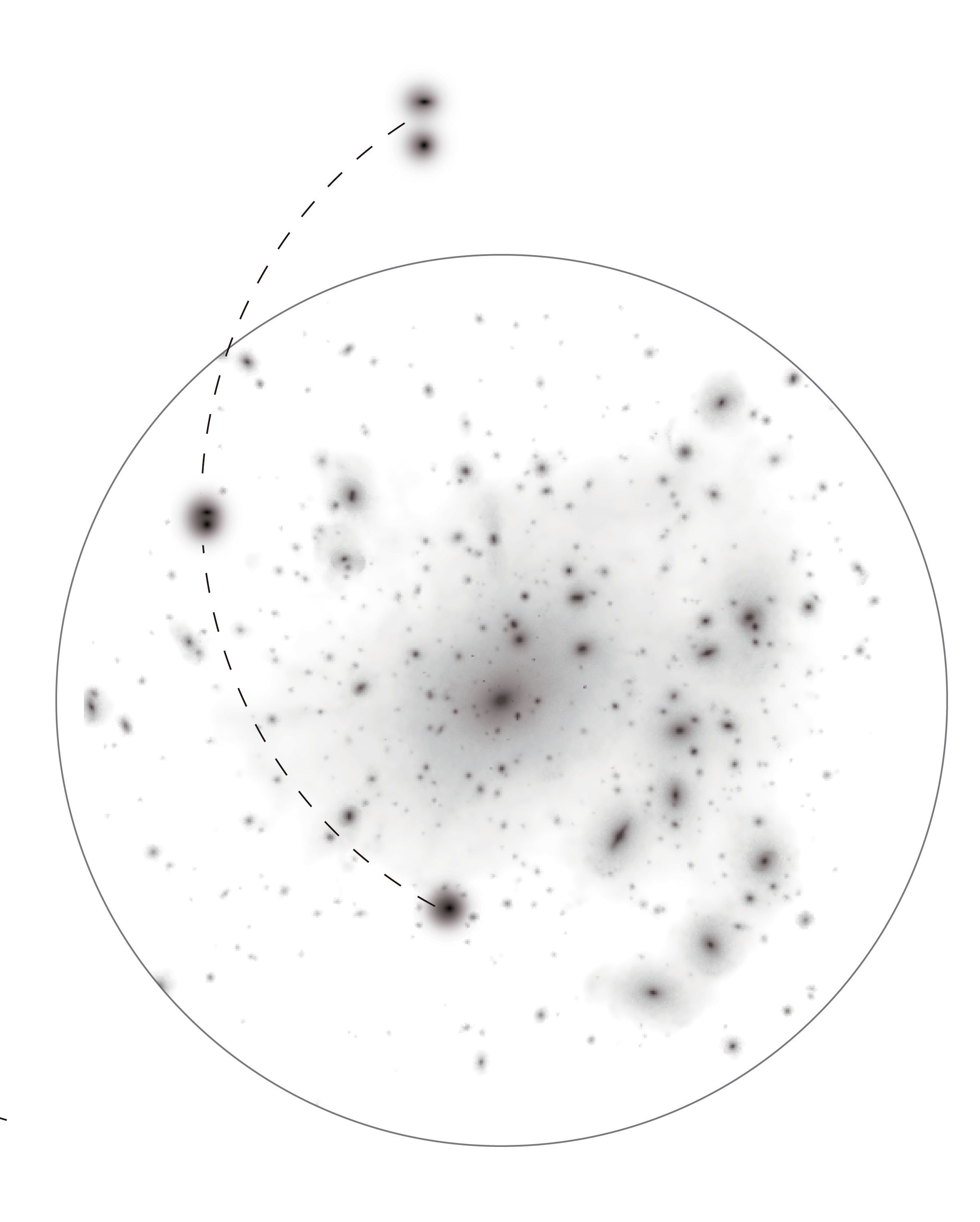 Galaxies can be isolated, assembled into systems with few members, or they can form clusters of hundreds of galaxies. Just as cities grow from the arrival of people from other places, it is well known in Astronomy that large clusters of galaxies are formed from smaller ones. However, the details of this migration from galaxies to clusters were not yet known.

When the image of a cluster of galaxies is obtained, it is as if we were taking an aerial photo of a city, since it gives us a lot of information but does not allow us to be certain about how it was transformed until it reached its current state. For this reason, this research team analyzed the arrival of galaxies to clusters through numerical simulations, in which the evolution of these systems and the changes that galaxies undergo when entering the clusters can be observed. For this analysis, they made use of the computational resources of the IATE and the High Performance Computing Center (CCAD-UNC).

“We use the hydrodynamic cosmological simulations called Illustris, we choose ten galaxy clusters, we look at what they would be like today and, given that we have information from previous times, we analyze how these systems evolved and how the galaxies that today are part of the cluster arrived” explains José Benavides, a doctoral fellow from the UNC Science and Technology Secretary who heads the research published in the Monthly Notices of the Royal Astronomical Society journal.

Image of one of the simulated clusters analyzed in the study (left) and of a Hubble Space Telescope observation of the cluster Abell 1689 (right). Designed by Rocío Rodríguez.

In the study, they found that galaxies that fall into the cluster, such as people who migrate, can do so alone, in pairs or groups. “Galaxies can arrive singly or in groups of up to eighty galaxies together, with a whole range in between; however, the more members a group has, the less likely it is to fall into a cluster ”, describes Mario Abadi, a CONICET researcher with extensive experience in the study of the galaxy formation and evolution. 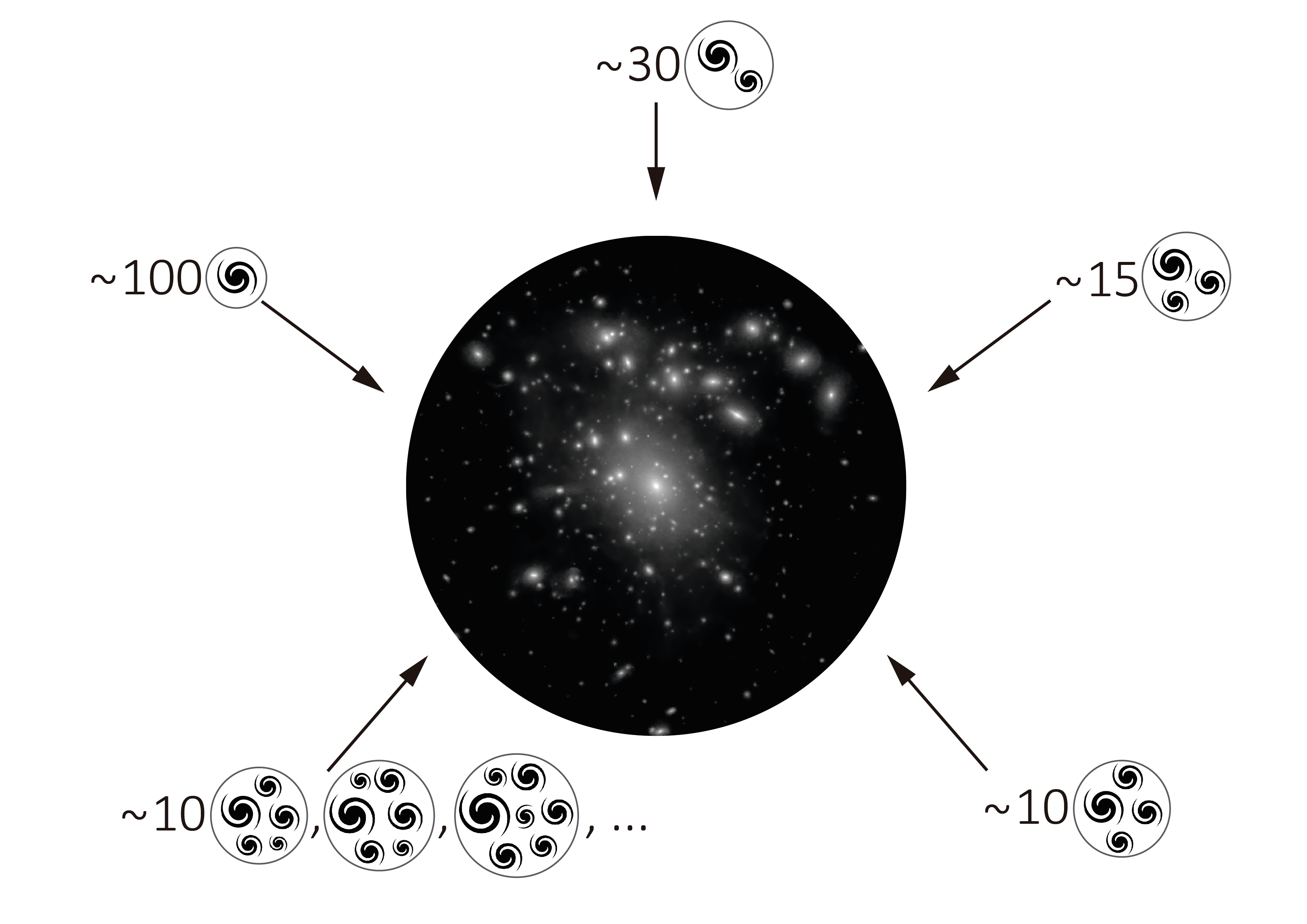 In this scheme, carried out by taking into account the results obtained, it is shown how a cluster is the result of the fall of approximately 100 individual galaxies, 30 pairs, 15 triplets, 10 groups of four members and 10 groups with five galaxies or more. Designed by Rocío Rodríguez.

“In the same way that groups of low-mass galaxies, called dwarfs, arrive in the Milky Way, in larger or more massive systems there is the same phenomenon and it occurs in more or less the same proportions. This is one of the strongest predictions of the current cosmological model, and it is interesting to verify it in galaxy clusters with our work ”, says Laura Sales, who has carried out various investigations related to this topic.

Just as in city centers there are many people, but each one goes their way, passes quickly and, therefore, there are not many possibilities of interaction; in clusters, something similar happens. The galaxies move in the cluster at high speeds, and therefore it is unlikely that two galaxies will meet and merge. "We always say that the velocities of galaxies in clusters inhibit the possibilities of mergers; however, there are images where structures are observed that indicate interactions; therefore, we decided to explore this in our work and try to explain it", says Mario Abadi. "We found that there were merger events but between galaxies that had a common origin, that is, they came together. Since the relative velocities between them are low, they continue to interact even in this new environment; it's as if they keep their roots", adds José Benavides. 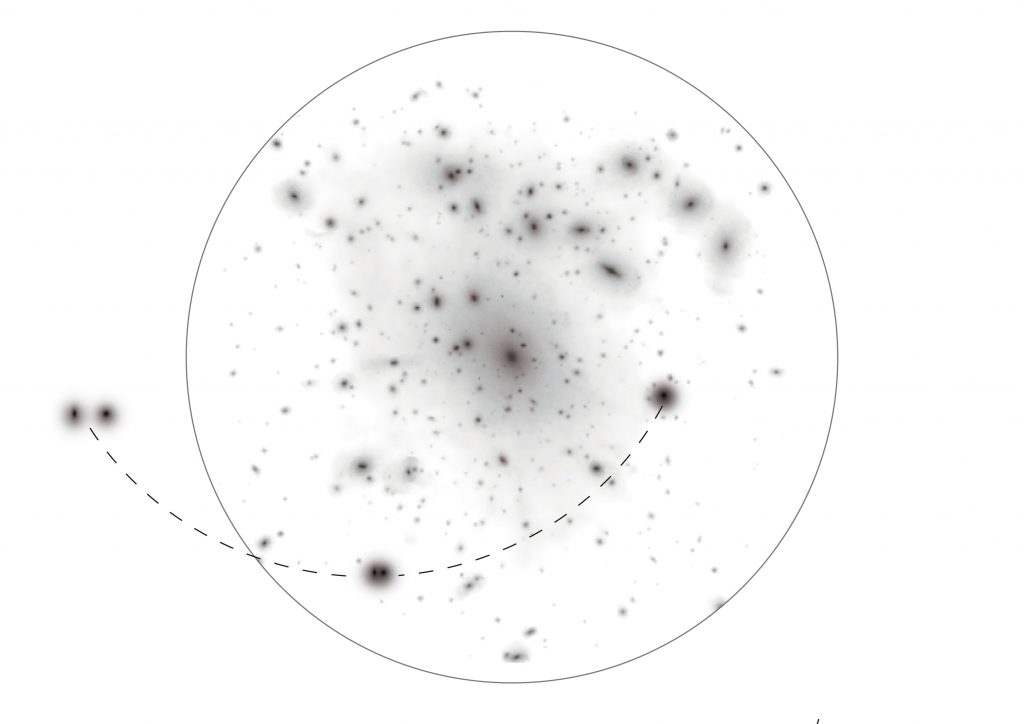 This image shows a pair of galaxies that fall together in the cluster and in this process they merge. Designed by Rocío Rodríguez.

Another question that guided this work is whether the galaxies, once they fall into the cluster, retain a memory of the group in which they arrived. That is, if some of its characteristics can be used to know which ones arrived together in the cluster. And they found that the galaxies in a short time are assimilated and mixed with the population of the cluster. Although variations are depending on the trajectory of the systems, in the span of one or two billion years (a small amount in cosmological terms), they already lose their identity and it is difficult to establish which ones have a common origin.

Migrations in the working group

After this published work, this group is currently carrying out similar analyzes but in simulations with higher resolution, which allows them to study low-mass galaxies, called dwarf galaxies, and investigate their formation processes. On the other hand, they are collaborating with other work teams to relate some of their learning in simulations to what is found in observations.