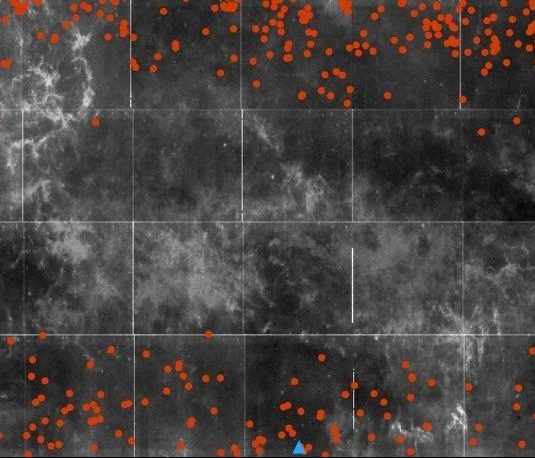 When we look at the sky, there is a large strip of light that was known in ancient times as the Milky Way. Today, we know that this strip is due to the brightness of the spiral galaxy that we inhabit, which was given the same name.

Due to the gas, dust, and stars in our galaxy, it is difficult to observe what is behind it, mainly in the brightest region. So while there are millions of galaxies observed in the rest of the sky, only dozens were known in that region.

Various studies focus on observing and analyzing the stars of the Milky Way to obtain more information about the galaxy we inhabit. One of them is the survey of variable stars carried out in the near-infrared by the Vista telescope, called VVV (for the acronym of VISTA variables in the Milky Way). The project that María Victoria Alonso and Laura Baravalle began in 2012 consists of using images from the VVV survey, not for what it had been created for, but rather to identify those galaxies darkened in that region of the sky. That is, they thought that those images could allow them to study galaxies that had not yet been found. To carry out this idea, the support and collaboration of Dante Minniti, who leads the VVV survey, was essential.

Although the data had not been originally intended to study extragalactic sources, after the development and implementation of a method and working together with other people from the IATE and other institutions, it was possible to identify 5563 galaxies of which only a few dozen had been previously identified. As a product of the research, not only are the positions of these new galaxies provided, but the catalog has an important added value in which its colors, morphology, size, among other properties. The results obtained were recently presented in the Monthly Notices of the Royal Astronomical Society journal.

"In the optical, before you could not see the objects that are behind our galaxy. People who do extragalactic astronomy study the entire sky except for that area. So, the realization of this catalog is an important fact”, affirms María Victoria Alonso, a researcher at CONICET and a professor at the UNC with a wide experience in extragalactic observations. “Also, as a result, the first thing we get are numbers that indicate the positions, but when we go to see the image and a galaxy appears, it is incredible. From the whole process, an object comes out that is there and nobody saw! It is the most beautiful part”, adds Laura Baravalle who dedicated her final undergraduate work, her doctorate, and post-doctorate to this project.

Distribution of the identified galaxies on a stellar density map of the Milky Way. New galaxies are shown in red, and those that were already known in blue. Image adapted from the scientific publication.

Growth of the project

From the beginning, in addition to the support of Dante Minniti, Associate Professor at the Universidad Andrés Bello, the study had the collaboration of José Luis Nilo Castellón and his team from the University of La Serena in Chile. The project began with the development and evaluation of a galaxy candidate detection method in a small portion of the VVV survey. Then, to perform this task efficiently throughout the survey, it was necessary to implement other computational resources due to a large amount of data to be processed. The collaboration of Carolina Villalón and Darío Graña from the IATE systems area was essential for this. After having applied the detection method to the entire survey, they found a large number of possible galaxies, so a detailed visual inspection was necessary: ​​looking at each of the possible candidates. To carry out this task, the contribution of the entire team was very important, especially Carlos Valotto, a researcher at IATE, Fernanda Milla Castro from the University of La Serena, and Mario Soto from the University of Atacama in Chile.

After 8 years of work, the researchers leading this project have opened the doors for future analyzes and they plan to continue establishing ties. Some of the studies they are planning are to use machine learning methods that replace the task of visual inspection of galaxy candidates, observe the galaxies found with other telescopes to estimate their distance, and thus deepen their distribution studies, among others.

The researchers agree that it was gratifying to find new galaxies, but also to be able to generate ties between different people, who contributed to the development and realization of the project.

← From dust, we come... Study of the evolution of galactic dust
FOF 2021: First Announcement →